Dominaria United is right on our doorstep, which means that we have all collectively survived yet another spoiler season. Spoiler season can be really grating after a while, because most Magic players aren’t very good at evaluating the new cards in the context of whatever format they like to play. Not you, dear reader, I’m sure you’re very good at it, i’m talking about that other guy. While the topic of evaluating spoilers is an article series in and of itself, some key factors to consider are

1. Does this card slot into a potential home at the moment?

2. Is this card strong enough to support its own archetype?

3. What kinds of other cards are required to make this card good, and are they available in the format in such a capacity that this card may create some sort of impact?

4. Is the flavor of this card strong enough to support my including it in this terrible janky brew that i’ll have a good time even though I’m about to end up 0-9 at the next event I go to?

For me, number 4 here is one of the most key points, and when a card hits that number 4 chord just right that your bones start to wiggle, you can tell that you’ve got a banger of a card on your hands. Completely unrelated to all of this build up, let’s talk about Bard Class. 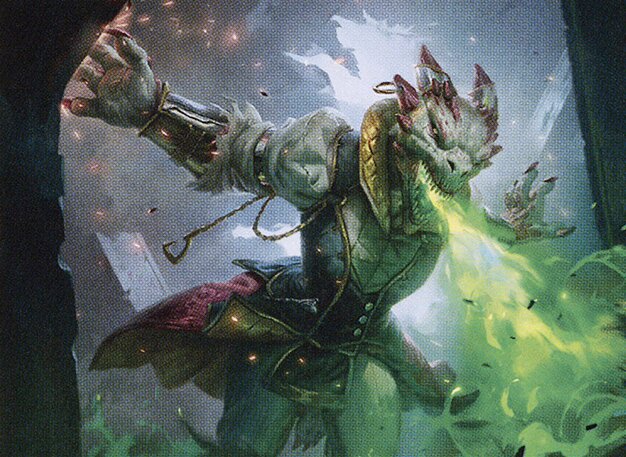 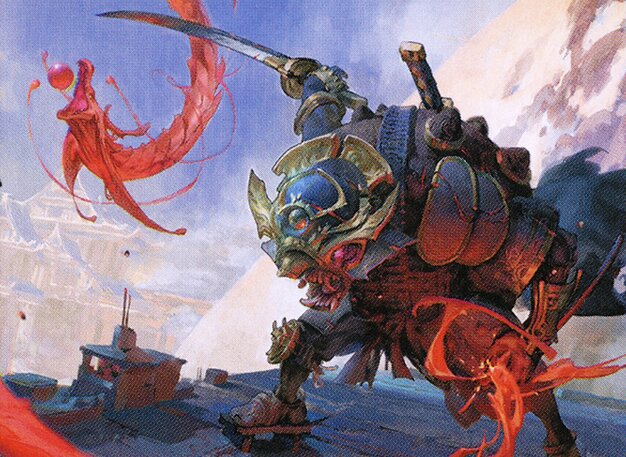 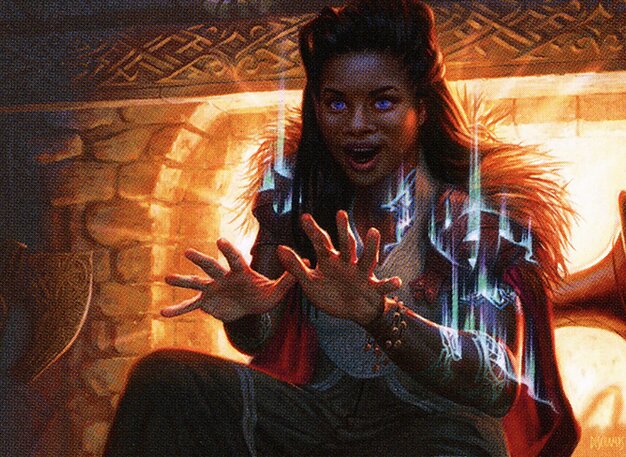 Gruul Bard Class is an aggressive combo deck that looks to take advantage of its namesake to power out large amounts of huge threats to quickly overwhelm the opponent’s boardstate. Similar to how the Bard class in D&D walks the line between several of the other most powerful singular classes and combines them all into one, the Bard Class deck also looks to walk the line between quick aggression and game ending combo, essentially flipping the switch to start threatening the combo and leaving it on just to mess with the opponent until it chooses to go off. The combo here is of the storm variety, where the deck uses Bard Class as a mana generator and card advantage engine to repeatedly cast creatures and fill up the battlefield, give them all haste and swing in to end the game on the spot. While the combo isn’t very far detached from the main game plan, it is still frequently impactful enough to swing the tide of the game completely if not generate an outright win on the spot.

The deck, in both form and function, mirrors the card Bard Class in its construction and gameplay. Step one of the class is the buffing of creatures. At this end, the deck plays two auxiliary forms of mass-creature-buff in Grumgully, the Generous and Domri, Anarch of Bolas. The former seems very innocuous, but with the entirety of the creature base being non-human, Grumgully’s additional counter can mean a ton of additional damage that frequently outlives the goblin itself. Domri acts as more of a utility piece, with its anthem effect being the least of the card’s powerful abilities. Domri is key in fighting through counterspells for this deck, and the additional mana that he provides enables some devastating turn threes with the right hand. On top of it all, he acts as the deck’s lone main deck removal spell, one that is typically disrespected by an opponent’s creature suite until it’s already sniped the best creature on their side of the board.

The second level of Bard Class lowers the casting cost of Legendary creatures by up to two. With the way that the deck is constructed, this means that most of the deck can be played for between zero and two mana. This insane mana generation is crucial both to the combo turn and the general explosiveness of the aggro game plan. With the first level up of the class, three cards become completely free, being Zurgo Bellstriker, Gallia of the Endless Dance, and Targ Nar, Demon-Fang Gnoll. These three cards serve very similar function to the main game plan, being generic mana-efficient beaters that make the combo turn that much more dangerous as well. On their own, none of them are particularly impressive. There are some micro-synergies between Gallia and Xenegos (satyr tokens receive her buff), and Targ Nar can become a lone wolf win condition with enough mana. Eliminating their mana costs though makes these cards into legitimate powerhouses that ultimately hold up the rest of the deck through the early turns.

In addition to this pseudo mana generation from the class’s cost reduction, the deck is capable too of putting actual mana into the mana pool in a very real way. Llanowar Elves is of course included because the deck plays basic Forest, and its omission would be illegal. Birgi, God of Storytelling is here strictly to push the combo turn into overdrive, as her additional mana can typically pay the entire cost of the next cards exiled by the level III ability. Xenagos, the Reveler as well can single handedly generate multiple turns’ worth of mana with one plus activation, and the chaining together of these plus abilities is generally the driving factor in making the combo turn last.

The deck also takes advantage of even more mana generating synergies with its included treasure package. Magda, Brazen Outlaw in combination with Relic of Legends is able to fuel classic game play for several turns on end, letting the Relic tap for effectively three mana between the two cards. Ognis, the Dragon's Lash likewise interacts favorably with the many haste creatures in the deck to create even more treasures when the initial attempt at a combo may not get the job done. With all of these cards combined, mana is absolutely the last worry of the Bard Class deck.

The third level of the class provides the additional fuel that the fire needs to grow out of control. With each creature cast, two additional cards are brought forth to continue the chain. This effect is generally only taken advantage of during the combo turn, though it has happened before where the ability is used fairly in order to push through just that last smidge of damage. The final step of the combo is to give the entire team haste, which is easily done by way of Goro-Goro, Disciple of Ryusei. While his second ability is almost never useful, it should be noted that both the class and Grumgully create modified creatures, so it is a thing that can realistically happen. One important play to note is that when a worst-case event happens, such as hitting two lands off of an exile and “running out of gas”, Jegantha, the Wellspring is sitting over in the companion zone as an “in case of emergency” last resort Legendary. Between chaining multiple Xenagai and having a Birgi in play, it’s no big deal to have eight mana sitting in the pool, so casting the great Elk is simple.  Last but certainly not least is Squee, Dubious Monarch, who flavorfully doesn’t really fit in anywhere else so he’s being mentioned here at the end. Squee plays an important role in the beatdown plan, with his army-in-a-can and resilient body that can come back on repeat to take advantage of all of the extra mana floating around in this deck. While he isn’t individually better than one of his alternatives like Goblin Rabblemaster, his being Legendary makes him quite a force here as he soon becomes a two mana Rabblemaster with a 4/3 body that spits out 3/2s.

How does the deck play?

Bard Class is an extremely satisfying play experience. From opponents stopping to read cards to the multi-level synergy layering, the deck just ticks every rogue brewer’s checkbox. While many decks in the format are prepared to some degree to deal with the generic creature onslaught on the front end, there are many meta games where either or both plans of the deck can lead to impactful results, and the list can be tuned to fit those scenarios even more as well. While ultimately this is just a green red beatdown deck, it may be the most intricate and satisfying iteration of that broader archetype. The deck is seldom without something to do, though mana flooding can certainly occur and be particularly punishing as the only real source of card advantage is a third level class. However, the deck feels tight, and only stands to improve as time goes on for as long as Commander remains a popular way to play the game and Legendary cards continue to see print. Bard class is an excellent choice for those looking to pull out something spicy to mix up their FNM environments, to take advantage of a field full of non-interactive or linear decks, or for someone who really enjoys explaining things to their opponent. In true Bard fashion, the pilot of this deck is sure to spend a good deal of time speaking, explaining, elaborating, and generally flailing their arms about in a merry fashion.

That’s all for this one! Thank you all for your patience with this series as new additions have been relatively few and far between lately. There are some big things in the Play Team’s pipeline, and we’ve been working hard to set the table for you all. I do plan on putting more of a focus on this series in due time though. Until then, stay safe, play smart, and thanks for reading.