I was going to start this article with a beautiful paragraph about the rich history of the Lotus in MTG; going on about how iconic it is, and how important and impactful each new card that is included in this long lineage. It was going to take your breath away. I then remembered that one-hundred other content creators and YouTubers have already done that much better than I could ever put to writing, so I’ll do what I do best instead – talk about why Timeless Lotus could be a huge key-card in Pioneer! Not only does it make the best deck in the format even better (uh-oh!), but it also creates a new archetype (sweet!), and revitalizes one this format’s best decks to ever be legal (uh-oh?)! 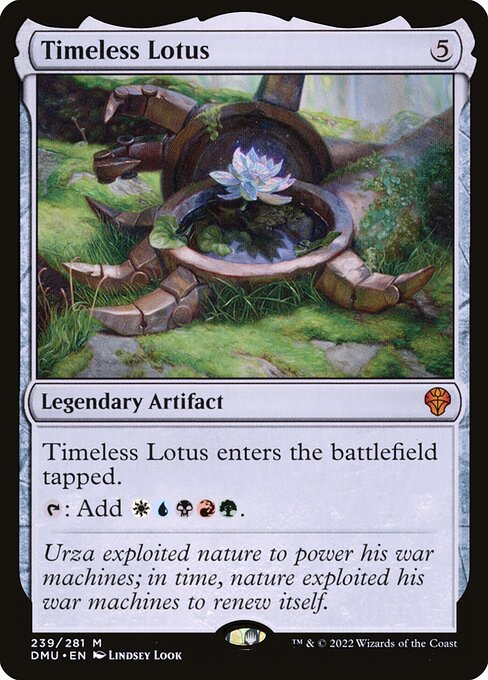 Five mana is a LOT of mana. The closest cards we’ve seen to this effect have been (which dominated the Standard format while it was legal), and Wilderness Reclamation (which as we all know, was banned in Pioneer due to a multitude of broken combos). As we can see from Magic’s past, doubling your mana is no joke, and I wouldn’t be surprised to see Timeless Lotus pop up in a multitude of strategies – the first of which being everyone’s favorite S Tier Pioneer deck, Mono-Green Devotion!

This card fits right into the Mono-Green Devotion shell, being a nice value card to find off of a Karn downtick. At the beginning of this deck’s existence, many decks played a copy of Golos, Tireless Pilgrim in the sideboard so that they could ramp out a copy of Nykthos, Shrine to Nyx when they were short on mana. While I do agree that Nykthos is definitely great, playing against decks with a lot of permission can leave you short on devotion a lot of the time. Instead, grabbing Timeless Lotus will allow a player to ramp from five to eleven mana, allowing them to easily flashback any Storm the Festivals they find, no matter how bad the hits off of them could be. Also, don’t forget about the interaction between this card, Kiora, Behemoth Beckoner and Teferi, Who Slows the Sunset which is something we will definitely be unpacking more of later in this article.

Yes, in a lot of situations, Nykthos will be able to generate more mana than Lotus, but that’s exactly why Karn is in this deck – to provide options. Timeless Lotus seems to be the best option we have for a long-term source of mana production. This also gives us the source of black mana that Green Devotion players have been debating which card provides that the best. We have seen cards such as Jack-o'-Lantern, Courier's Briefcase, Golos and an Overgrown Tomb in the main deck, and Treasure Vault in the sideboard. Timeless Lotus gives us the different colors of mana we’ve been looking for, at a pretty low deck building cost. This also could help cast Teferi when they become stranded in hand without an Oath of Nissa or the necessary lands to cast him. I’ve had my fair share of games where I’m stuck with two Teferis and zero other actions – putting myself dead to my drawstep. This Karn value target could help a ton in the matchups where you wish you had the additional resources to flashback a Storm instead of presenting something like a Skysovereign, Consul Flagship with that five mana.

One of the main ways people have been attempting to break this card is by untapping it to generate a ton of mana in a single turn. While there is no Twiddle in this format, Hidden Strings is close to the same card, untapping a land in addition to the Timeless Lotus. Vizier of Tumbling Sands becomes a Black Lotus that draws a card, and the planeswalkers from Mono-Green Devotion (Teferi and Kiora) are all very effective here. Unfortunately, however, there’s one main issue: why is this better than Lotus Field? Timeless Lotus does not get hit by Damping Sphere, but it’s pretty clear as to why Lotus Field combo would be faster. You don’t need to put time and resources into generating your Lotus effect if you play it as your third land. Although Timeless Lotus generates significantly more mana than Lotus Field does, the high cost of playing this card makes it difficult to create a build-around combo for a five mana card. Even though this Lotus is still VERY good at going straight from five to eleven mana – is there really a deck that is looking to do exactly like that in Pioneer right now? Well… let’s get into it.

This has to be one of my favorite Pioneer decks of all time. I created this archetype within a few hours of The World Tree being spoiled, and my teammates and I performed super well with this deck for about three weeks – until Wilderness Reclamation bit the ban bullet, due to the dominance of Temur Reclamation. This is the updated version of this deck, looking to take full advantage of Timeless Lotus to untap and win the game on the following turn. The World Tree needs ten additional mana to activate and grab the necessary gods to win the game on the spot, so if you have The World Tree in play when you play your fifth land untapped, all you need to do is slam Timeless Lotus, untap, play your sixth land, and you win the game. Sounds great, right?

Well, there’s a few issues with this, compared to the older Wilderness Reclamation version. This one requires you to untap with the Lotus, which might not be as easy as it sounds. In a format dominated by Mono-Green Devotion, we’re going to have some trouble beating Karn, the Great Creator. We have some Leyline Bindings in the deck – another great new addition from Dominaria United that is sure to make some big splashes in every format – but other than that, that’s really it. We’re also generally a turn slower than the Devotion deck, leading to a lot of the other low-to-the-ground creature decks running us over. Thankfully, we’re able to use some removal spells and other interaction to slow them down (un-like Devotion), but we are still a bit slower than we used to be. In addition to this, as good as Timeless Lotus is, it’s nowhere near as good as Wilderness Reclamation. We have to take our five mana turn off to play a ramp piece and tell our opponent “I’m defenseless, can you kill me?”, which is always pretty terrifying, especially in a world where decks like White Humans, Boros Heroic, and Mono-Green Devotion will just respond with “Gladly.”

However, I suspect that decks like this will play extremely well in other top decks at the moment, such as Azorius Control and Rakdos Midrange. We are basically a ramp deck that has a neigh-uninterruptible combo finish, and the counterspell decks generally have issues dealing with that. There is no denying that in this new version of the deck, there is a TON of raw untapped potential that is waiting to be explored.

I will definitely be spending more time on this archetype, trying to find the best way to make it work, because just building the main deck brought back some awesome memories of a Pioneer format of old.